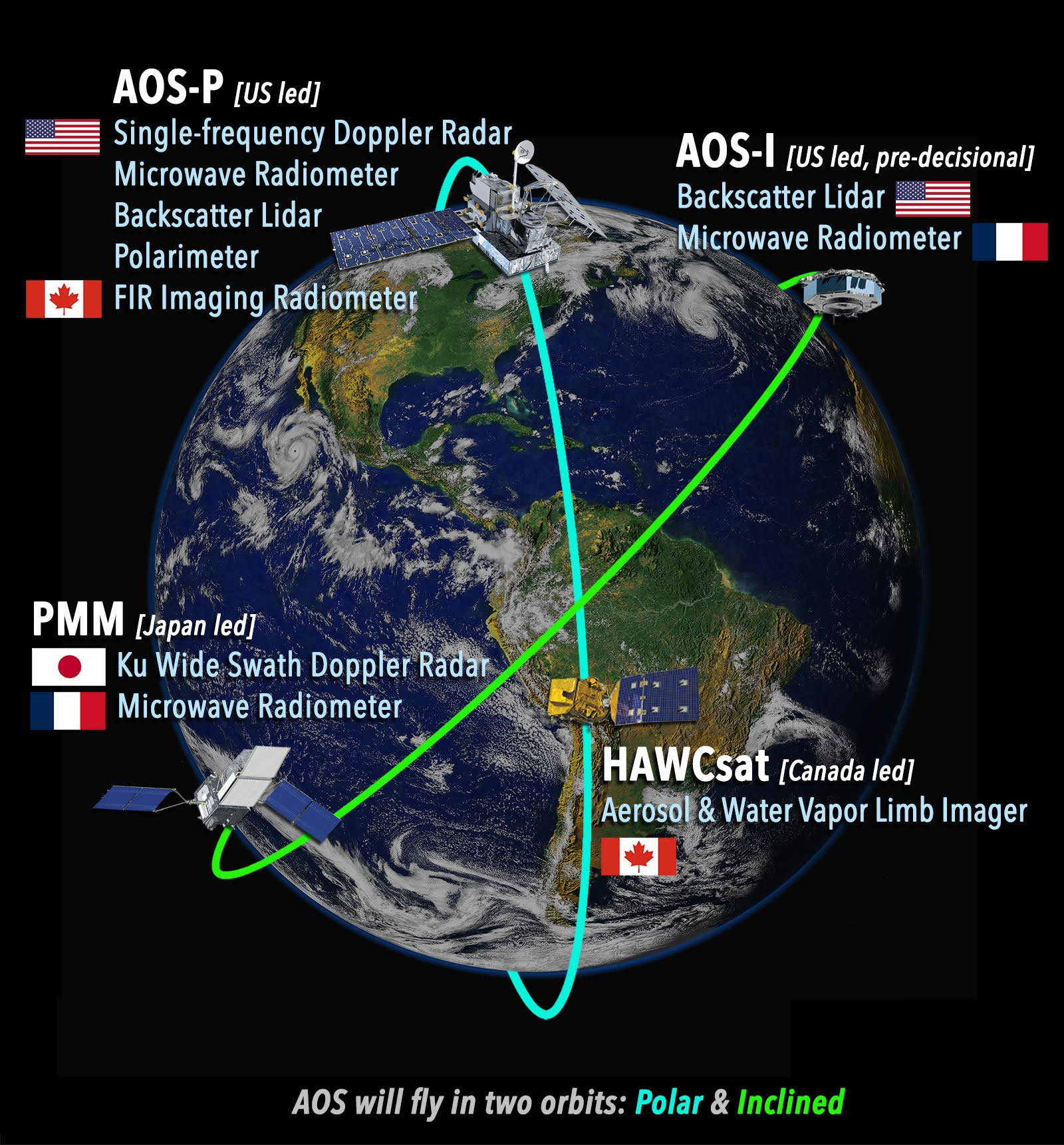 Researching answers to the AOS science questions will involve collecting measurements from instruments installed on spacecraft and suborbital platforms. The data will enable improved understanding of aerosols, convective storms, clouds, precipitation, and the impact on our climate.

How will all these parameters be measured?

The inclined orbit spacecraft will fly within a band of latitudes centered on the equator, for the purpose of taking measurements at varying times of the day. This orbit allows the instruments to “see” how cloud, precipitation, and aerosol properties change over the course of the day.

The polar orbit spacecraft covers the full range of latitudes from pole to pole, but only gets measurements at two fixed times of the day (01:30 and 13:30). This orbit allows for better characterization of more slowly changing processes across the entire globe and provides continuity with past missions in similar orbits.

Science Applications of the Instruments

The AOS Mission will provide information to improve our understanding of: The data from the various AOS instruments will be applied to study:

Instruments - How and Why?

RAdio Detection And Ranging (radar) instruments measure the scattering of microwave energy to determine the amount of liquid or ice in clouds and precipitation. Different parts of the microwave spectrum are used to measure clouds, light rain, and heavy rain. Doppler radars also measure the Doppler shift caused by a moving target (the cloud or rain droplets, for example) to measure the winds that are causing that movement.

The W-band radar is known as a cloud radar, capable of seeing clouds and light precipitation. Because AOS has a significant interest in profiling low clouds, a radar capable of profiling close to Earth's surface is needed. The W-band radar is capable of measuring profiles of drizzle down to a few hundred meters above the surface. This capability will be used not only for measuring low clouds, but also for measuring snow to near the surface where phase transitions can often occur and be missed by other radars.   Ka and Ku-band radars are better suited to moderate and heavy precipitation and are particularly needed for convective storms. The cloud radar (W-band) can't penetrate very far into a region of heavy rainfall. Ka-band, in the middle, improves radar penetration, while Ku-band radar penetrates to the surface. 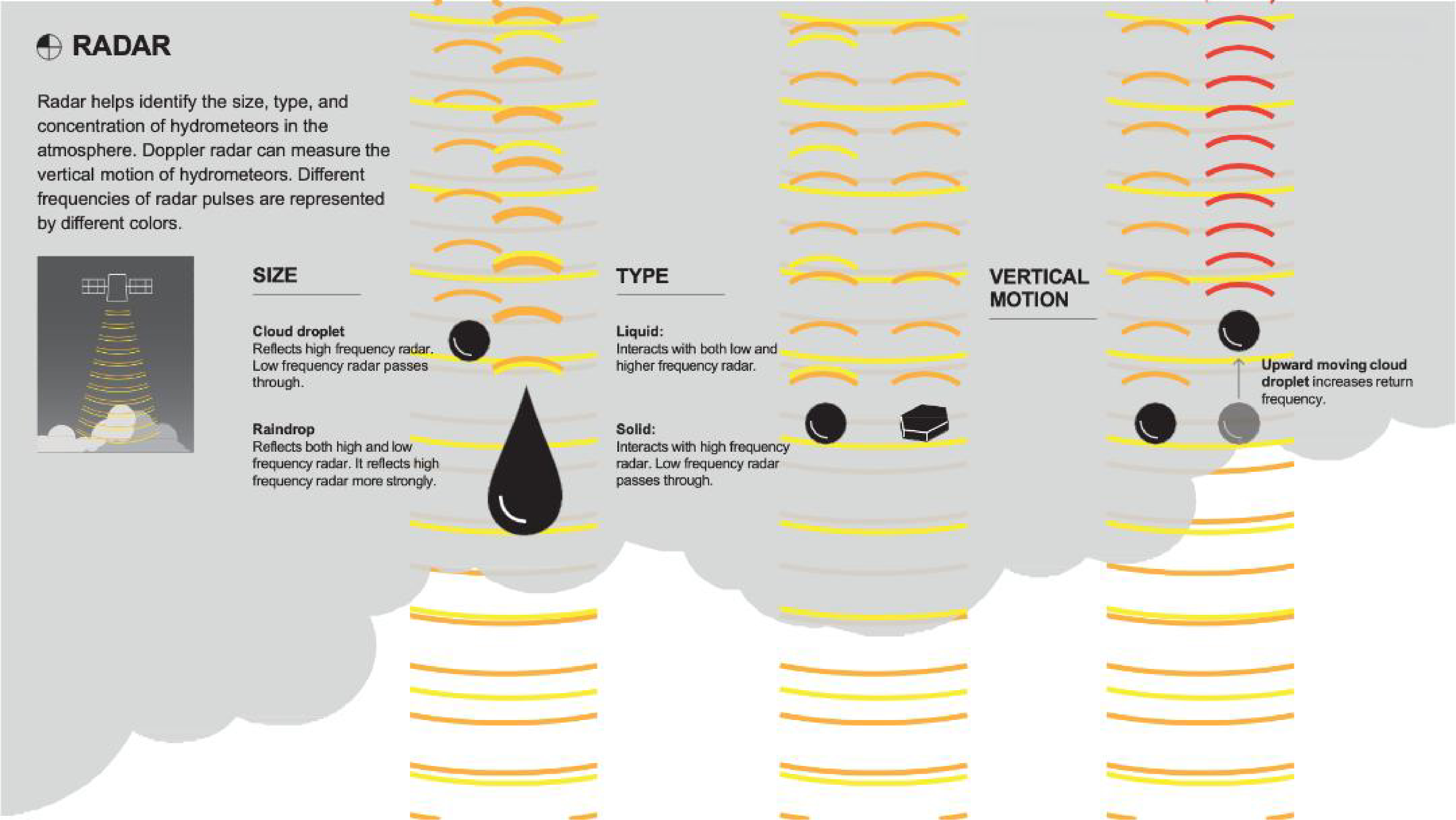 Light Detection and Ranging (Lidar) is similar to radar, but instead of bouncing radio waves off its target, lidar uses short pulses of laser light. Some of that light reflects off of tiny particles in the atmosphere and back to a telescope aligned with the laser.

By precisely timing the lidar's "echo," and by measuring how much laser light is received by the telescope, scientists can accurately determine the location, distribution and nature of particles. The result is a tool for studying constituents in the atmosphere, from cloud droplets to industrial pollutants that are difficult to detect by other means. AOS lidars may have two and three frequencies, backscatter and High Spectral Resolution Lidar (HSRL). Radar can provide profiles of optically thick or visible clouds and precipitation. Lidar can provide profiles of optically thin or very faint clouds and particles invisible to a radar. Co-located radar and lidar observations allow the vertical structure of cloud occurrence and heating to be characterized. 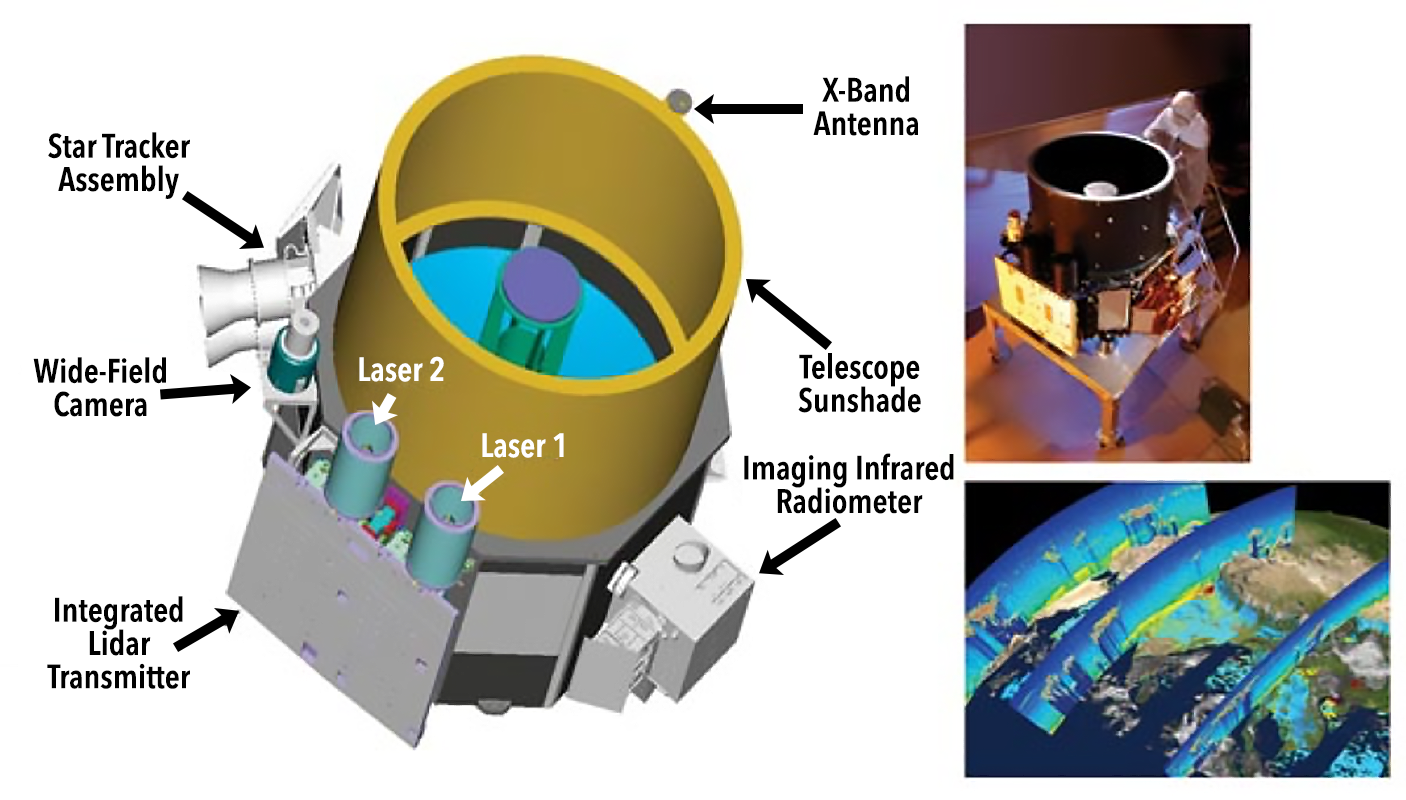 This lidar image is from CALIPSO and a similar system will be deployed with AOS.

A radiometer measures the intensity of radiation emitted at specific wavelengths. Radiometers are often combined with radar and lidar to derive meteorological parameters such as temperature, humidity, and water vapor.

AOS radiometers will include cross-track and conically scanning, with frequencies ranging from 10 to 833 GHz. The 874 - 883 GHz wavelength range, for example, will be utilized for detecting ice content in clouds. 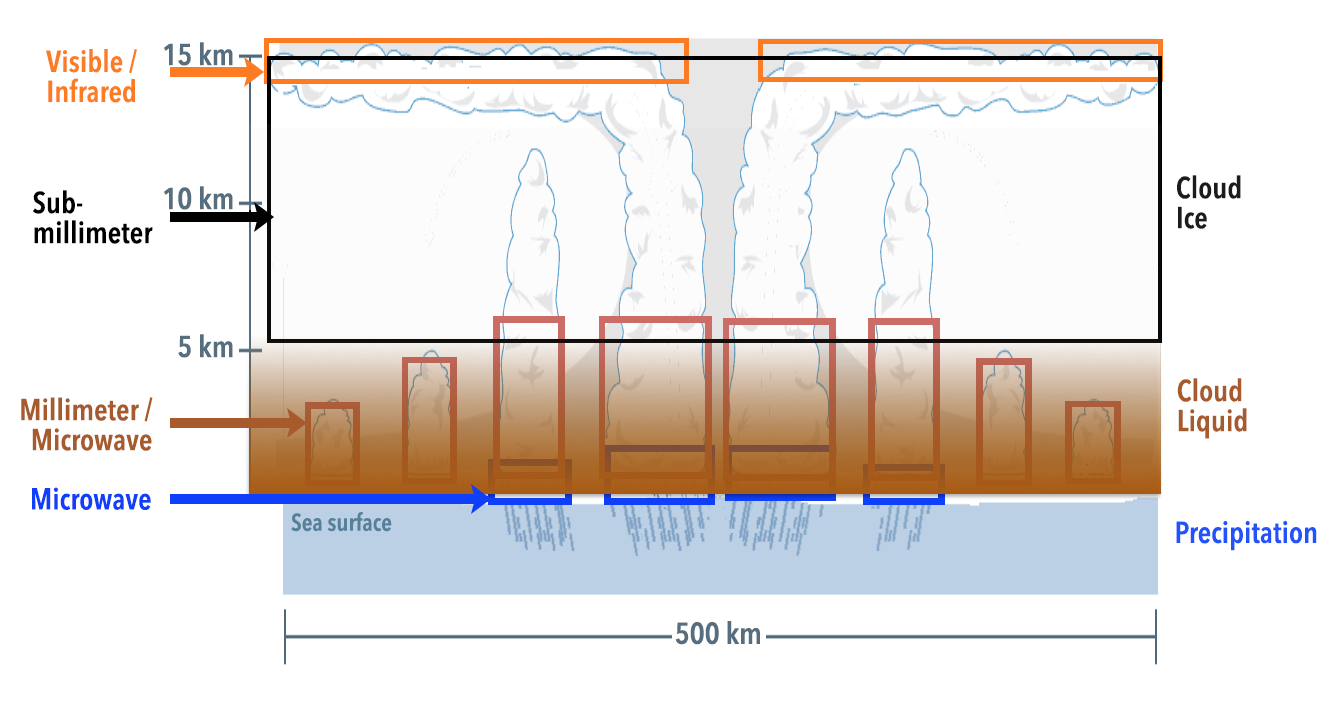 Overview of how radiometry at various wavelengths is used to understand clouds and precipitation. Source: NASA.

A spectrometer is used to separate and measure wavelengths of light as it interacts with materials, in this case trace gases and particulates. 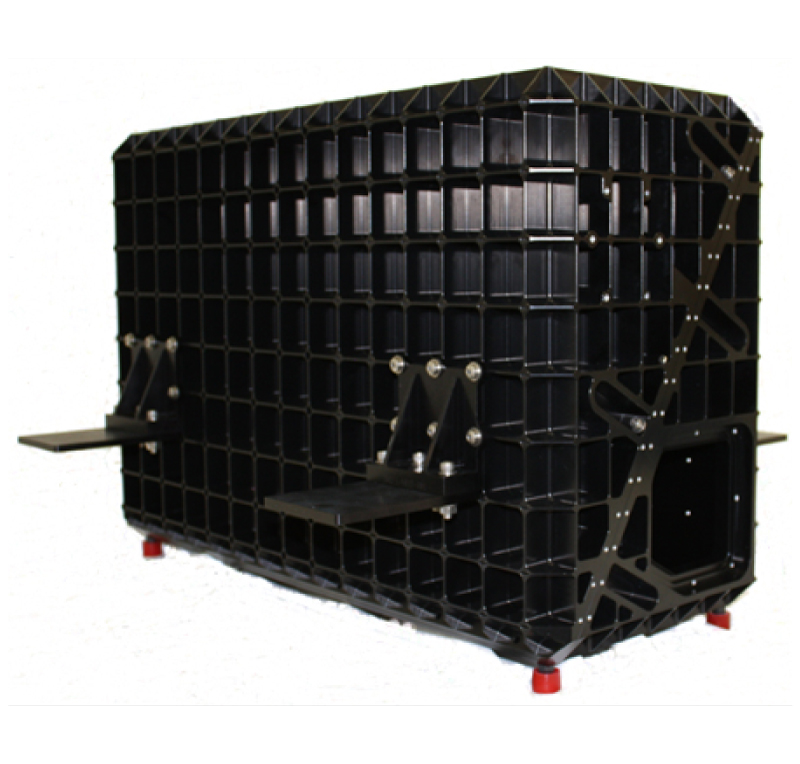 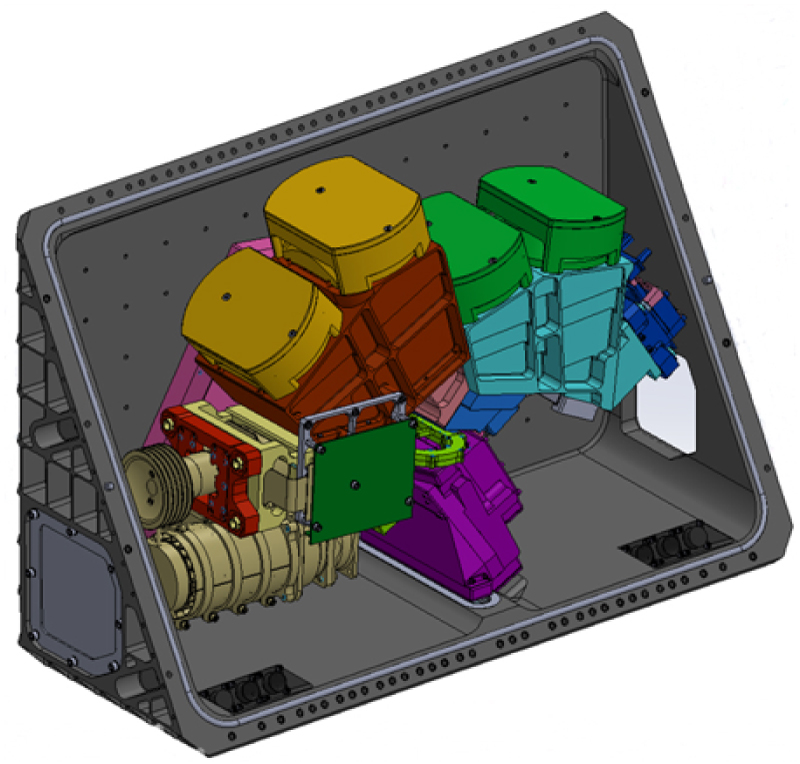 As the satellite orbits, the polarimeter measures the angle of rotation of different angles of sunlight scattering off substances such as aerosols. The polarimeter uses the information of how substances affect light to identify their characteristics. For example, some substances are optically active, and polarized light will rotate either to the left (counter-clockwise) or right (clockwise) when light passes through them. The amount by which the light is rotated is known as the angle of rotation or observed angle.

A polarimeter helps identify the size, type, concentration, and orientation of hydrometeors – liquid and solid water particles – and aerosols in the atmosphere. AOS polarimeters will include varying channels (5 to hyperspectral) and angles (5° to 255°). Spacecraft will have a pair of spectrometers, one that measures the solar energy reflected by clouds and reflected and absorbed by aerosols and another that measures the radiation emitted by cloud and aerosol layers.